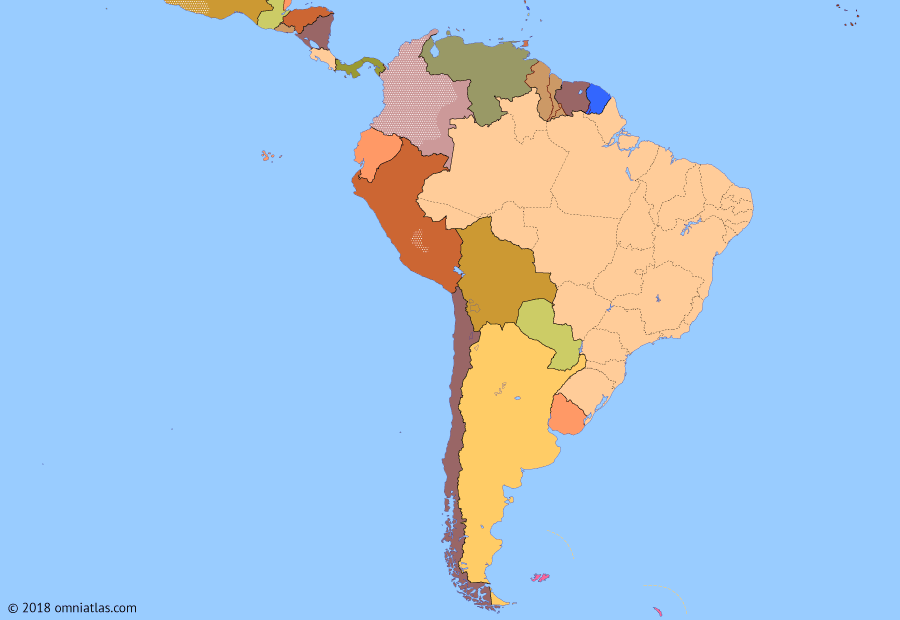 The US victory in the Cold War encouraged Latin American states to adopt neoliberalism; a course which led to economic hardship for many. In a popular backlash starting in the late '90s, leftist leaders were elected into power across the region in what was dubbed a 'pink tide'. Prominent among these new statesmen was Hugo Chávez of Venezuela, who used his country's oil wealth to fund not just socialism at home but to form ALBA - an alternative to the US-dominated Rio Pact.

Under orders from the Peruvian government, an elite unit of the National Directorate Against Terrorism (DIRCOTE) raided a residence and suspected safe house in the Surco neighborhood of Lima, discovering and arresting Shining Path leader Abimael Guzmán and eight of his followers. The police also found Guzmán’s computer, with detailed records of Shining Path guerrilla forces and bases. Following the arrest, as well as the 1999 capture of Guzmán’s successor, the weakened Shining Path split into factions and, in 2018, was ultimately succeeded by the Militarized Communist Party of Peru. in wikipedia

Under the populist presidencies of Ramiro de León and Alvaro Arzu, the Guatemalan government cracked down on corruption and human rights abuses. Starting with León the peace process, now brokered by the United Nations, was strengthened. Between 1994 and 1996, peace deals were made between the government and the Guatemalan National Revolutionary Unity (URNG), agreeing on human and indigenous rights and ultimately bringing a peaceful end to the Civil War.in wikipedia

After Ecuador constructed military outposts in the Peruvian-claimed Cenepa valley to the east of the Cordillera del Cóndor, Peru moved land and air forces into the region. Following clashes over a period of several weeks, the Peruvian military prevailed and a ceasefire was arranged. In October 1998, the two nations would sign the Brasilia Presidential Act, clarifying the frontier between them and putting an end to the territorial dispute.in wikipedia

Venezuelan President Hugo Chavéz launched the Bolivarian Revolution—a leftist and populist movement to promote nationalism and socialism in Venezuela, and build a coalition of like-minded states in Latin America. Financially backed by Venezuelan oil money, the movement proved inspirational to many states in the Americas, even as Chavéz’s policies drove increasing numbers of Venezuelans abroad. However, when oil prices began to fall—and especially after Chavéz died in 2013—Venezuela faced rampant inflation, income loss, and hunger, leading to protests across the country.in wikipedia

On the morning of 11 September 2001, nineteen members of the terrorist group Al Qaeda hijacked four commercial airplanes, crashing two into the World Trade Center in New York City and one into the Pentagon in Arlington, Virginia; the fourth crashed in Pennsylvania en route to Washington, DC. The vast majority of the damage was done to the twin towers of the World Trade Center, which both completely collapsed within an hour and 42 minutes of being struck. The attacks killed almost 3,000 people, injured some 6,000 more, and caused at least $10 billion in property damage.in wikipedia

The Mexican government announced its official withdrawal from the Inter-American Treaty of Reciprocal Assistance (TIAR, also known as the Rio Pact), citing the treaty’s obsolescence in the face of global change. President Vicente Fox had previously denounced the treaty on 7 September 2001, and the treaty had been strained in Latin America by the US support of the UK against Argentina in the Falklands War of 1982. By the terms of the pact, Mexico’s departure would be formally complete two years later—on 6 September 2004.in wikipedia

Alleging that Iraq was developing weapons of mass destruction, the United States formed a “Coalition of the Willing” to invade the country in March 2003. Although Coalition forces defeated the ruling Ba’ath Party by early May of that year, no such weapons were found, and a state of war continued to exist between the Coalition and domestic insurgent groups until US withdrawal in 2011.in wikipedia

In the Cuba-Venezuela Agreement, Presidents Fidel Castro of Cuba and Hugo Chavez of Venezuela created the Bolivarian Alternative for the Peoples of the Americas (ALBA), a political organization aiming for social, economic and political integration in Latin America and the Caribbean. In 2009, the name would be changed from “Bolivarian Alternative” to “Bolivarian Alliance”. Nine more countries—Antigua and Barbuda, Bolivia, Dominica, Ecuador, Grenada, Nicaragua, Saint Kitts and Nevis, Saint Lucia, and Saint Vincent and the Grenadines—would join the alliance by the end of 2014.in wikipedia

On 11 December 2006, the government of Mexico authorized military force against La Familia drug cartel in the state of Michoacán. Over the following three years, Mexico launched parallel attacks against cartels in Baja California, Sinaloa, Nuevo León, Tamaulipas, Chihuahua, Quintana Roo. The operations had limited success and a broad insurgency exists throughout the country to the present time. in wikipedia

The twelve independent nations of the South American continent signed the UNASUR Constitutive Treaty in Brasilia, formally integrating the Andean Community with the Mercosur nations to create the Union of South American Nations. The objective of the union was to integrate the economies of South America, establish a single currency, promote democracy, and allow free movement of peoples. As part of UNASUR, the South American Defense Council was formed as an alternative to the US-dominated TIAR (Rio Pact)—although it remained a cooperative security agreement rather than a conventional alliance.in wikipedia