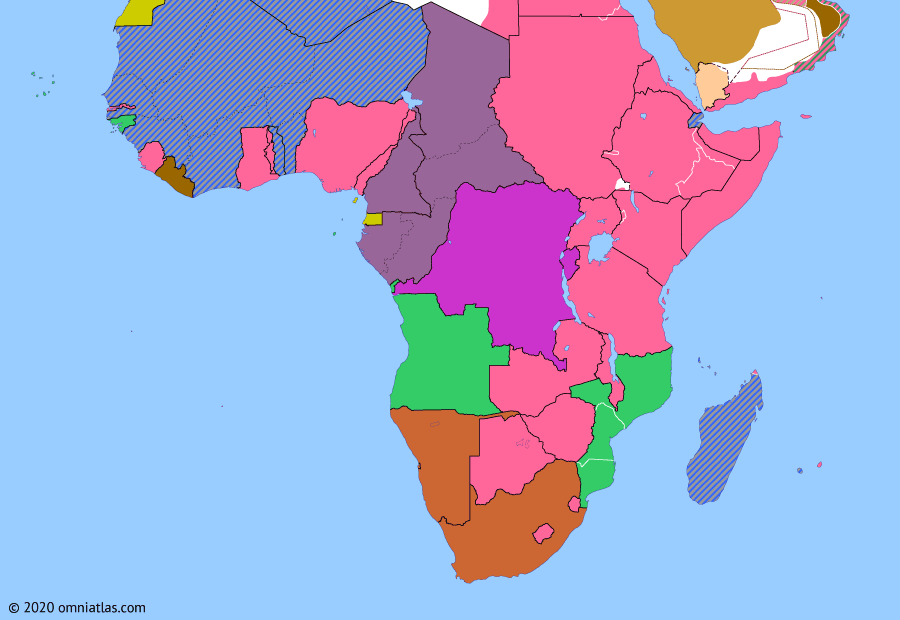 Mar 1942–May 1947Ascension Island hosts
major US air base

In December 1941 Japan entered World War II by attacking US and British bases in the Pacific. The following March the Japanese mounted a raid into the Indian Ocean, threatening British holdings there. Concerned that Japan's next move would be to establish itself in Vichy Madagascar, the British landed forces at Diégo Suarez in the north of that island in May.

At 3:15 am the Axis Powers led by Nazi Germany launched the invasion of the Union of Soviet Socialist Republics, bombing cities in a broad arc from Kronstadt to Sevastopol as some three million troops advanced across the border. Within hours the momentum of the Axis attacks had completely destroyed the Soviet organizational command and control, paralyzing every level of command, and it was only at 7:15 am that Soviet leader Josef Stalin announced the invasion to the Soviet Armed Forces and called upon them to act.in wikipedia

British, Commonwealth, and Ethiopian forces converged on the mountain town of Gondar, Ethiopia, which was defended by 40,000 Italian troops under Generale Guglielmo Nasi. The Allies seized the two mountain passes to the town, attacking Gondar itself on 27 November. The Italians surrendered soon after, ending conventional resistance in Italian East Africa (although guerrilla warfare would continue into 1943).in wikipedia

The British Eighth Army under newly-installed General Claude Auchinleck opened an offensive in North Africa, bypassing Axis fortress positions on the Egyptian border as they moved to relieve besieged British troops at Tobruk, Libya. The attack pushed Erwin Rommel to withdraw his German-Italian forces to Tobruk, which was finally relieved by the British advance on 10 December after a three-week battle. Defeated, Rommel retreated first to Gazala and then El Agheila, temporarily ceding Cyrenaica to the British.in wikipedia

The German and Italian forces of Panzerarmee Afrika, under Colonel-General Erwin Rommel, launched Operation Theseus—an attack on the British Eighth Army in Libya. The British retreated to the Gazala Line, west of Tobruk, which they held until June 13. Over the following four days, Rommel chased them from Libya, receiving the surrender of the isolated British garrison at Tobruk on the 21st.in wikipedia

Major General Sir Philip Mitchell of the United Kingdom signed an interim agreement with the government of Ethiopian Emperor Haile Selassie, confirming Ethiopia’s status as a sovereign state following the British conquest of Italian East Africa. However Britain still influenced Ethiopia through advisors and retained control of security, banking and finance. It also continued to administer the Ogaden from occupied Italian Somaliland, and Haud and the ‘Reserved Areas’ adjacent to French Somaliland from the Somaliland Protectorate.in wikipedia

In agreement with Britain, the United States established an airbase—Wideawake Field—on Ascension Island, primarily as a staging point for transatlantic flights and for operations against German U-boats in the Battle of the Atlantic. Between 1943 and 1945, over 25,000 aircraft of the US Air Force transited through the island en route to Africa and Europe, while up to 4,000 US troops were stationed there. The US began withdrawing in 1945 and in 1947 the last forces departed, leaving the island to its 170 residents.in wikipedia

In Operation C, a Japanese fast carrier strike force under Chuichi Nagumo advanced into the Indian Ocean. Between 5 and 9 April they attacked the Royal Navy bases at Colombo and Tincomalee in Ceylon, sinking two cruisers, two destroyers, and the light aircraft carrier Hermes, while a Japanese cruiser force raided merchant shipping in the Bay of Bengal. However the British had been alerted, and managed to withdraw most of their fleet to the Maldives and the Persian Gulf.in wikipedia

In response to fears that the Japanese might occupy Vichy French-controlled Madagascar, the Allies decided to launch an amphibious assault on the north of the island. At 2:35 am on 5 May 1942 British Force 121 began landing at Courrier Bay and Ambararata on the northwest coast, crossing over to attack Diégo Suarez by that afternoon. The following day more forces entered Diégo Suarez Bay from the east, landing at Antsirane. Vichy resistance continued for another day, after which Diégo Suarez surrendered to the British.in wikipedia