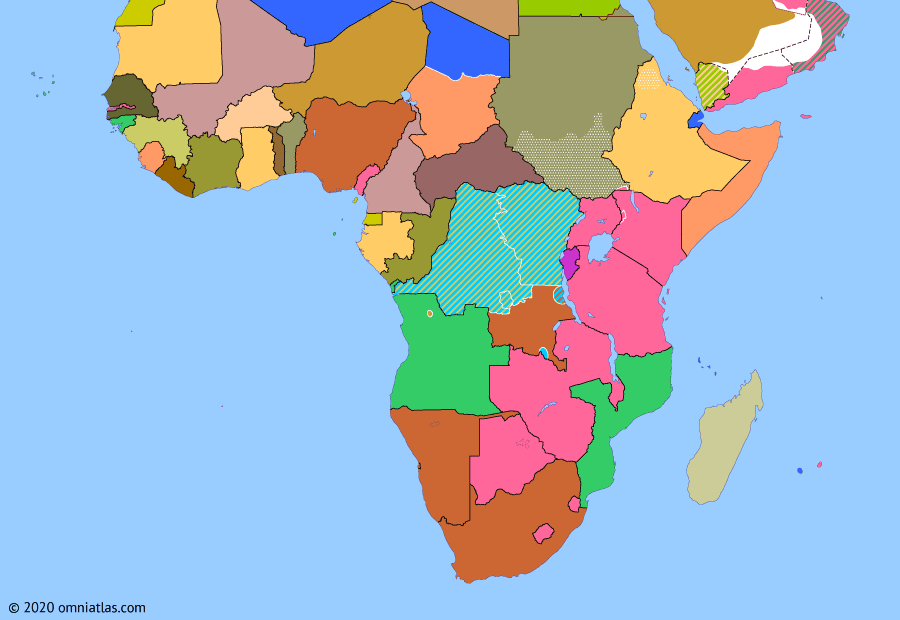 31 May 1961South Africa leaves
the Commonwealth

Africa and the Cold War

A major step towards defusing the Congo Crisis occurred in August 1961, when Gizenga agreed to recognize the government in Léopoldville. The next month the UN launched its first major offensive in Katanga in order to expel foreign mercenaries. Although this operation was only partially successful, subsequent UN actions would lead to Katanga being reabsorbed into the Congo by early 1963.

On 27 April 1961 Sir Milton Margai, the pro-British and conservative 65-year-old Prime Minister of Sierra Leone, led his country to independence from the United Kingdom. Margai would die in office three years and one day later, to be succeeded by his 53-year-old half-brother, Albert Margai. Unlike his older brother, the second Margai would prove to be highly corrupt and authoritarian and his regime would end in electoral defeat in 1967, followed by a coup and counter-coup.in wikipedia

Delegates from Liberia, Nigeria, Ethiopia, Somalia, Sierra Leone, and most of the nations of Francophone Africa met in Monrovia, Liberia, to form the Conference of Independent African States (or Monrovia Group). Unlike the rival Casablanca Group, the Monrovia Group did not seek political federation or deep integration and were not strongly Pan-African or anti-Western.in wikipedia

On 11 February 1961 the British-administered UN Trust Territory of British Cameroons held a referendum on which of its neighbors to join: Cameroon or Nigeria. The Muslim-majority Northern Cameroons opted in favor of Nigeria, officially become part of that country on 1 June. The Christian-majority Southern Cameroons, on the other hand, preferred Cameroon, which it joined on 1 October.in wikipedia

The Republic of Dahomey occupied the Portuguese Fort São João Baptista de Ajudá in Ouidah, quickly overwhelming and capturing the two Portuguese defenders of the 2 hectare enclave. The captives were escorted to the Nigerian border and expelled; the fort was annexed to Dahomey.in wikipedia

In June 1960 delegates from Antoine Gizenga’s Free State of the Congo began negotiations with the central government of the Congo at the United Nations mission in Léopoldville, leading to a truce between the two factions on 27 July. On 2 August Cyrille Adoula became Prime Minister of the Congo, appointing Gizenga as one of his deputy prime ministers. Gizenga responded by recognizing Adoula’s government on 5 August, although his regime in Stanleyville continued to display signs of autonomy until it was dissolved in January 1962.in wikipedia

On 15 April 1961 the United Nations called for the withdrawal of non-UN foreign personnel from the Congo, although it made exceptions for the government in Léopoldville. In August the UN Operation in the Congo (ONUC) launched Operation Rum Punch, arresting 81 foreign officers and mercenaries—among them a number of Belgians—in Elisabethville in secessionist Katanga. The action was halted when the Belgian Consul agreed to take responsibility for the arrest and evacuation of foreign personnel.in wikipedia

On 1 September 1961 eleven Eritrean rebels led by Hamid Idris Awate, a 51-year-old wanted nationalist and war veteran, attacked Ethiopian police posts in the vicinity of Mount Adal in western Eritrea. Although Awate would die the following year, possibly from battle wounds, his action would mark the beginning of the Eritrean War of Independence.in wikipedia

Operation Morthor began in mid-September, with the UN Operation in the Congo (ONUC) seizing key buildings in Elisabethville and ordering all Katangan soldiers and mercenaries to lay down their arms. The UN actions—the most aggressive move against Katanga so far—were criticized by France and the UK, but supported by the US, Soviet Union, and India. Katanga retaliated, ordering air attacks on ONUC forces and capturing a 158-strong Irish company in a five-day battle in nearby Jadotville. The campaign ended with a ceasefire and the exchange of prisoners.in wikipedia

En route to negotiating a ceasefire over the crisis in Katanga, United Nations Secretary-General Dag Hammarskjöld and 15 others died when the aircraft they were flying in crashed near Ndola, in Northern Rhodesia (now Zambia) in the Federation of Rhodesia and Nyasaland. Despite suspicions, foul-play was ruled out by the Rhodesian Board of Investigation, the Rhodesian Commission of Inquiry, and the United Nations Commission of Investigation.in wikipedia