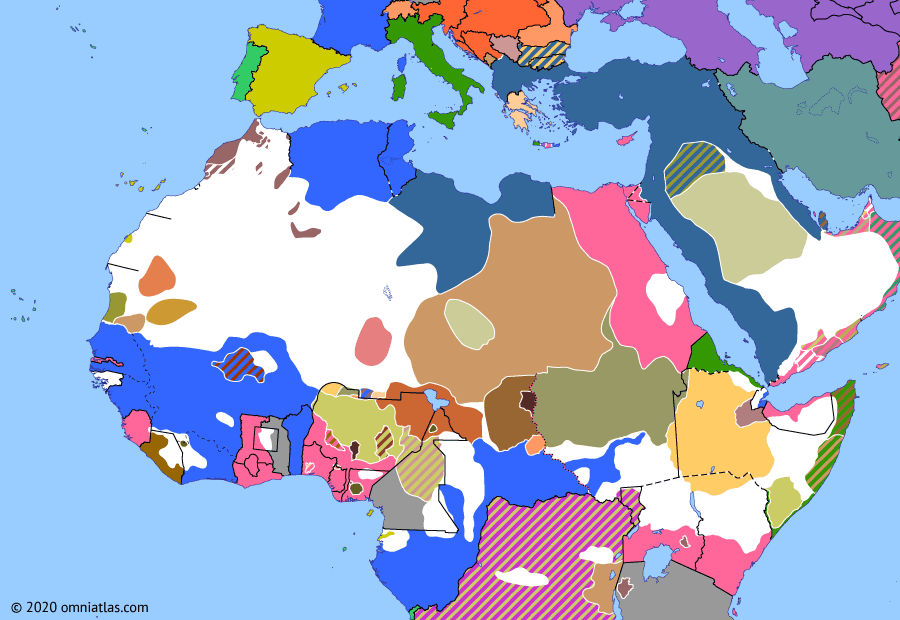 In late 1897 the Anglo-Egyptian army under Herbert Kitchener began preparing for a final push south to recapture Khartoum and destroy Mahdist power in the Sudan. As he gathered his forces, the Mahdists attempted to oppose him, but were routed at Atbara in April 1898. Advancing south in late August, Kitchener decisively defeated the Mahdist army at Omdurman in early September and marched into Khartoum.

In 1897 the French colonial officer Émile Gentil arrived in the Sultanate of Bagirmi, where the Mbang, Gaourang II, informed him that the powerful warlord Rabih az-Zubayr had been responsible for the death of the explorer Paul Crampel. Gaourang then signed a treaty with Gentil, accepting French protection. Angered, Rabih invaded Bagirmi, forcing Gaourang to flee his capital Massenya for refuge with the French in Kouno.in wikipedia

In October 1897 the French officer Gabriel Marius Cazemajou left Say, French Sudan, in an attempt to meet with Rabih and possibly rendezvous with the Congo expedition of Émile Gentil. Crossing the Sokoto Caliphate—British-claimed territory where he caused disruption by forming protectorates over Kebbi and Tessaoua—Cazemajou reached Zinder, capital of the Sultanate of Damagaram, in April 1898. Although received cordially by Sultan Amadou Kouran Daga, Cazemajou was murdered a few weeks later as he prepared to leave, bringing the expedition to an abrupt end.in wikipedia

In accordance with earlier Anglo-Italian agreements on the Egyptian–Eritrean border line, Colonel Charles Parsons and the 16th Egyptian Battalion marched from Suakin in November 1897 to relieve the Italian garrison at Kassala. The Italians aided the British by capturing the small Mahdist outposts of El Fasher and Asubri, before ceding Kassala to the British-controlled Kingdom of Egypt on Christmas Day.in wikipedia

At the end of 1897 the British secured control of the Atbara River, allowing Herbert Kitchener to begin consolidating the Anglo-Egyptian army at Fort Atbara, at the confluence of the Atbara and the Nile, for the great push on the Mahdist center of Omdurman. In April, having gathered 14,000 troops and several steamships, Kitchener opened his offensive, attacking the 15,000-strong Mahdist army which had gathered at nearby Nakheila. In a battle lasting just 45 minutes, the British routed the Mahdists, opening up the road to Omdurman.in wikipedia

In early May 1898 the French seized Sikasso, bringing an end to the Kénédougou Kingdom. From Sikasso a French column under Captain Gouraud then advanced south against Samori Ture’s Wassoulou Empire on 12 August, but, anticipating this move, Samori had already fled towards the Liberian border. Gouraud chased Samori through the savanna and mountain forest, eventually capturing him on 29 September and sending him into exile in Gabon.in wikipedia

In June 1898 Britain and France signed the Convention between Great Britain and France for the Delimitation of their respective Possessions to the West of the Niger, and of their respective Possessions and Spheres of Influence to the East of that River—or Niger Convention—concluding the partition of West Africa by finally fixing the boundary between Northern Nigeria and the French Sudan. The agreed border placed the Sultanate of Sokoto within the British sphere and divided the coast of Lake Chad. The treaty also clarified the frontier between the Gold Coast and the neighboring French colonies.in wikipedia

In July 1896 Captain Jean-Baptiste Marchand arrived in the French Congo to lead an expedition to the Upper Nile, eventually establishing a number of French stations in the Bahr El Ghazal (the Sudan south of Darfur) in late 1897 and early 1898, including Fort Desaix (Wau). From here Marchand and his largely Senegalese force pushed downriver with the help of a portable steamer, arriving at the strategic White Nile settlement of Fashoda (Kodok) in July, which they occupied in the face of Mahdist opposition. However, a simultaneous effort under Christian de Bonchamps to reach Fashoda from French Somaliland (Djibouti) was forced to turn back while crossing Ethiopia, denying Marchand needed reinforcements and undermining the French bid to build an east–west axis in Africa.in wikipedia

In early September 1898 British general Sir Herbert Kitchener led a force of 8,000 British regulars and 17,000 Egyptian and Sudanese troops, supported by a 12-gunboat flotilla on the nearby Nile, to threaten the village of Egeiga, just north of the Mahdist base of operations at Omdurman. Some 50,000 Mahdist warriors under Abdullah al-Taashi moved into position to oppose Kitchener, attacking the British at around 6:00 on the morning of the 2nd, only to be repelled by British Maxim guns. The British then struck back with their own cavalry and, defeating a number of surprise counterattacks, decisively routed the Mahdist army later that day, allowing the British to march on into Khartoum.in wikipedia