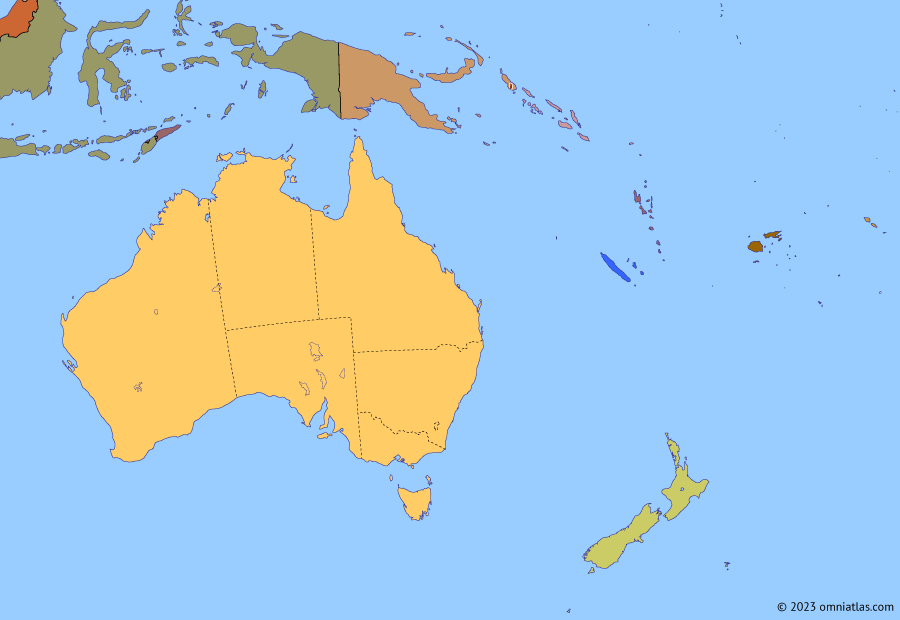 Decolonization of the Pacific

Since 2003 Australasia has seen continued political stability, with no significant military events occurring after the 2006 Fijian coup. The region also avoided the main impacts of the Global Financial Crisis of 2008 and the COVID-19 pandemic, although whether it will remain this lucky into the future is less certain.

Rejecting the peace agreement with Papua New Guinea, Bougainville rebel Francis Ona had himself crowned as King Frances Dominic Dateransy Domanaa of Me´ekamui (an old tribal name for Bougainville) and continued to reign in the interior of southern Bougainville. When Ona died in July 2005, he was succeeded by Noah Musingku, who became King David Peii II of the “Twin Kingdoms” of Me´ekamui and Paapala. Musingku proceeded to hire Fijian soldiers to train his guards and provide security, funding his efforts through dubious online financial schemes. Despite official condemnation, he was still operating in late 2020, mainly because many of the authorities had invested in him.in wikipedia

A 6.3 Richter scale earthquake struck the Canterbury Region, New Zealand, 10 km south-east of the center of Christchurch, New Zealand’s second-most populous city. The quake caused widespread damage across the city, killing 185 people and badly damaging buildings and infrastructure. The subsequent exodus of people from Christchurch would see it fall behind Wellington to become the third most populous urban area in New Zealand.in wikipedia

On 15 March 2019 a gunman attacked Al Noor Mosque in Christchurch, New Zealand, during Friday Prayer before moving on to attack nearby Linwood Islamic Centre, live-streaming the first attack to Facebook. The attacks killed 51 people and injured 49, making it the deadliest mass shooting in New Zealand history. A 28-year-old Australian man and alleged white supremacist was apprehended shortly afterwards and charged with murder and terrorism.in wikipedia

From September (early spring) 2019 a series of wildfires broke out across eastern Australia and by December—over a month before the height of summer—had already broken records to become the most destructive bushfires in Australia’s recorded history. Although the direct human death toll was only 34 people, 445 died from smoke inhalation and the fires burned an estimated 18.6 million hectares, destroyed over 9,350 buildings, and killed approximately 3 billion terrestrial vertebrates. Attributed at least in part to Climate Change, the fires sent a smoke cloud larger than the contiguous United States across the South Pacific.in wikipedia

In November to December 2019 an independence referendum was held in Bougainville, a restive autonomous region of Papua New Guinea (PNG) centered on Bougainville Island. Choosing between greater autonomy within PNG and full independence, 98.31% of voters opted for independence. In July 2021, after negotiations, the Prime Minister of PNG and the President of Bougainville announced that they had agreed on the independence of Bougainville by 2027, pending ratification by the parliament of PNG. in wikipedia

The first cases of the COVID-19 coronavirus pandemic were reported in Australia in January 2020, but it was largely contained until 2021–22 by the closure of international borders (aided by the region’s natural isolation), the careful implementation of lockdowns, and, from early 2021, widespread vaccination programs. By mid-January 2023 Australia had reported 17,712 deaths, New Zealand 3,621, Fiji 883, Papua New Guinea 669, French Polynesia 649, New Caledonia 314, and Solomon Island 153. Through strict border controls, many of the smaller Pacific islands evaded the pandemic altogether until around 2022. in wikipedia

In December 2021 the recently formed submarine volcano of Hunga Tonga–Hunga Haʻapai in Tonga began a series of eruptions, culminating on 14–15 January 2022 when a major eruption hurled ash some 58 km (36 mi) into the air, causing widespread damage to the island kingdom and triggering tsunamis across the Pacific. The blast, which was audible as far away as New Zealand and Alaska, was both the most powerful volcanic eruption and the biggest atmospheric explosion recorded since the Krakatoa eruption of 1883. in wikipedia