the Arctic 1855: Crimean War in the Arctic 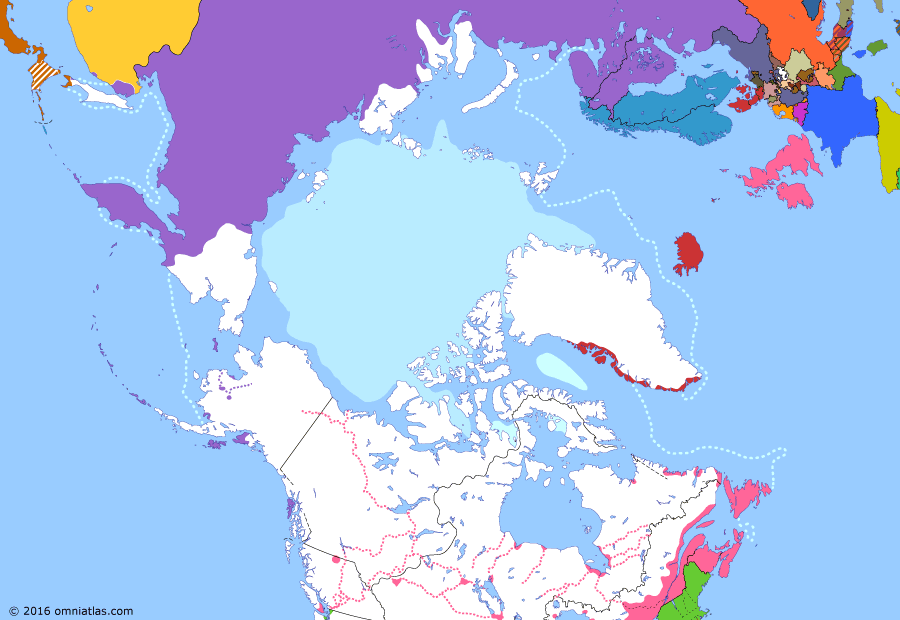 Crimean War in the Arctic

Other nations were soon to follow the United States in signing treaties with Japan, in particular Britain, which was currently fighting Russia in the Crimean War and busy hitting Russian bases along that country's vast coastline. With the use of Japanese ports, the British and their French allies were able to outflank the Russian naval base at Petropavlovsk and chase the outnumbered Russian Pacific fleet into hiding behind Sakhalin (which the Allies thought was a peninsula but the Russians knew to be an island). Nonetheless, the Russians managed to get their own emissary to Japan, opening up favorable relations and partitioning the Kuril Islands between them.

After entering the Baltic Sea, naval forces from the United Kingdom and the French Empire, supported by troops and artillery who had landed on the island, opened fire on the Russian fortress of Bomarsund on Sund (one of the Aland Islands). Following several days of facing bombardment by land and sea, the 2,000 remaining Russian defenders agreed to surrender. The Allies then demolished the fortress, remaining in occupation of the island until mid-September.in wikipedia

A British naval squadron of three warships led by HMS Miranda bombarded and destroyed Kola, Russian Lapland. The squadron proceeded into the White Sea, successfully shelling Solovki and Arkhangel. However the squadron’s attempt to storm Arkhangel with 800 sailors and marines was beaten back by the Russian defenders.in wikipedia

British and French forces, led by Rear Admirals David Price and Auguste Febvrier-Despointes, attempted to capture the Russian port of Petropavlovsk, Kamchatka, but their 2,600 men and six warships were beaten back by the 920 Russian defenders.in wikipedia

The Anglo-French expeditionary force landed at Calamita Bay, southeast of Eupatoria and 56km north of Sevastopol, in Crimea, Russian Empire. Although disorganised and weakened by cholera and dysentery, lack of Russian opposition to these landings allowed the Allies to form a beachhead of 6 km inland. On 19 September the two armies headed south, defeating the Russians at Alma the following day.in wikipedia

The United Kingdom, represented by Admiral Sir James Stirling, signed the Anglo-Japanese Friendship Treaty with the Tokugawa Shogunate, in Nagasaki, Empire of Japan. As a result of the treaty, the ports of Nagasaki and Hakodate were opened to British vessels, and Britain was granted most favored nation status with other western powers.in wikipedia

The Russian Empire, represented by Vice-Admiral Putyatin, signed the Treaty of Commerce and Navigation with the Tokugawa Shogunate in Shimoda, Empire of Japan. The treaty divided the Kuril Islands between Russia and Japan. Putyatin had been stranded in Japan when his ship Diana was sunk by a 7-meter tsunami in the 1854 Ansei Tokai earthquake and was only able to leave in April 1855 after building the schooner Heda.in wikipedia

British and French warships arrived in Petropavlovsk, Kamchatka, only to discover that the only three men left in the town were American—who had claimed the settlement for the United States and reported that the Russians had abandoned the town in April, with some escaping by sea through the ice and others withdrawing inland under the cover of snow. The Allies remained for several weeks to negotiate the exchange of prisoners with the inland Russians, before departing to join the China squadron. The Russians reoccupied the town by 1 September, after the last British warship had left.in wikipedia

In April 1855 Russian Rear Admiral Vasily Zavoyko abandoned Petropavlovsk and sailed to Nikolayevsk—a new Russian settlement in the Amur delta opposite Sakhalin and in what was internationally recognized as Chinese territory at the time—to construct a new naval base. A British squadron under Elliot pursued the Russians as far as De-Kastri, which they briefly occupied in May only to discover that it had been abandoned and the Russian ships had mysteriously disappeared (the British were unaware of Nikolayevsk just to the north, believing Sakhalin to be a peninsula). Elliot returned in October to find De-Kastri now fortified, but withdrew after a two week firefight failed to break the Russians.in wikipedia

In July 1855 the British warships HMS Amphitrite and HMS Barracouta captured the Russian port of Ayan on the Sea of Okhotsk before moving south to attack Russian shipping around the entrance to the Amur. The main British China Station squadron under Commodore Elliot arrived in Ayan early the next month but, finding it deserted except for the Archbishop of Siberia and a few inhabitants, withdrew 11 days later.in wikipedia

A French-British naval force traveling from Hakodate, Japan, landed on Urup, in the Russian Kuril Islands, taking possession of the island as l’Isle de l’Alliance and nominating a local Aleut inhabitant as governor.in wikipedia