In late 2019 the COVID-19 coronavirus appeared in China, quickly sweeping the world to become the most significant pandemic since the Spanish Flu one hundred years earlier. So how did these two pandemics compare in terms of lethality? And were the same countries affected the same way in both? 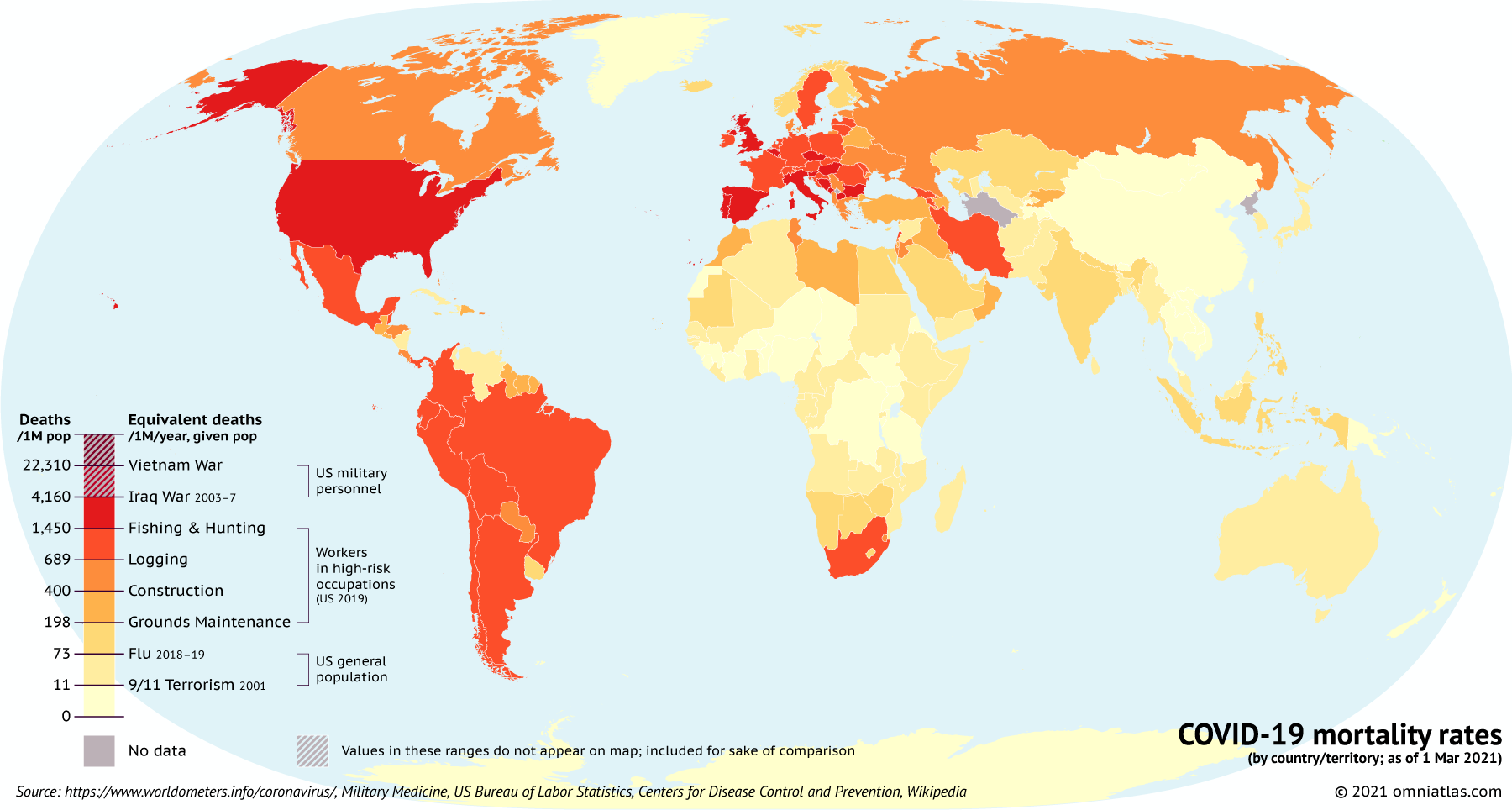 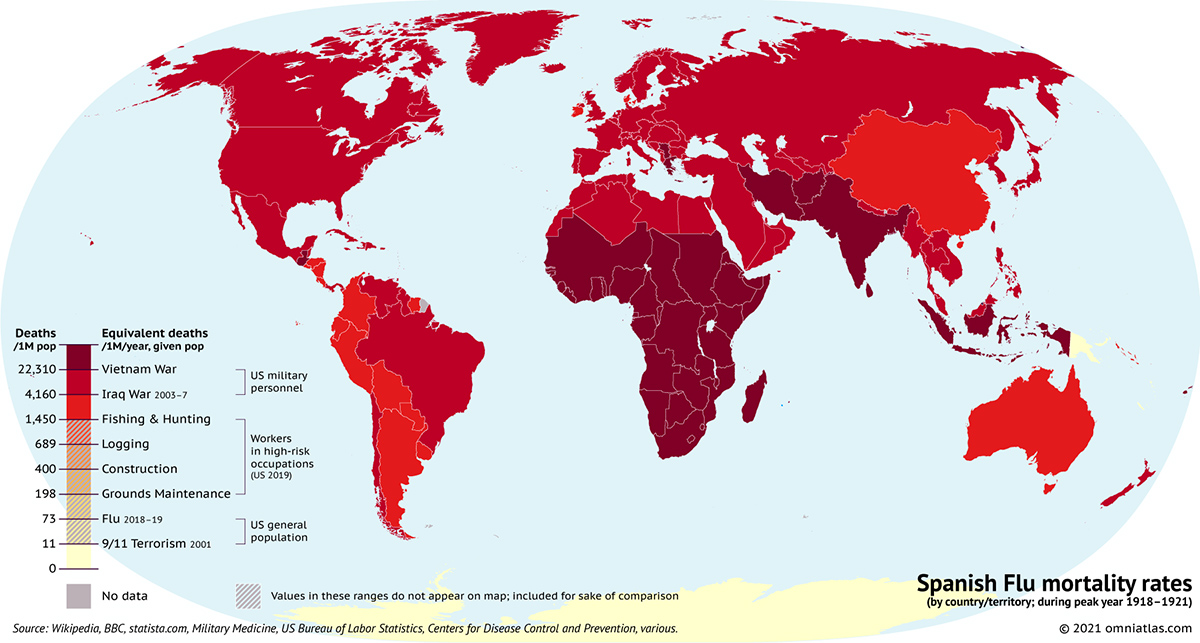 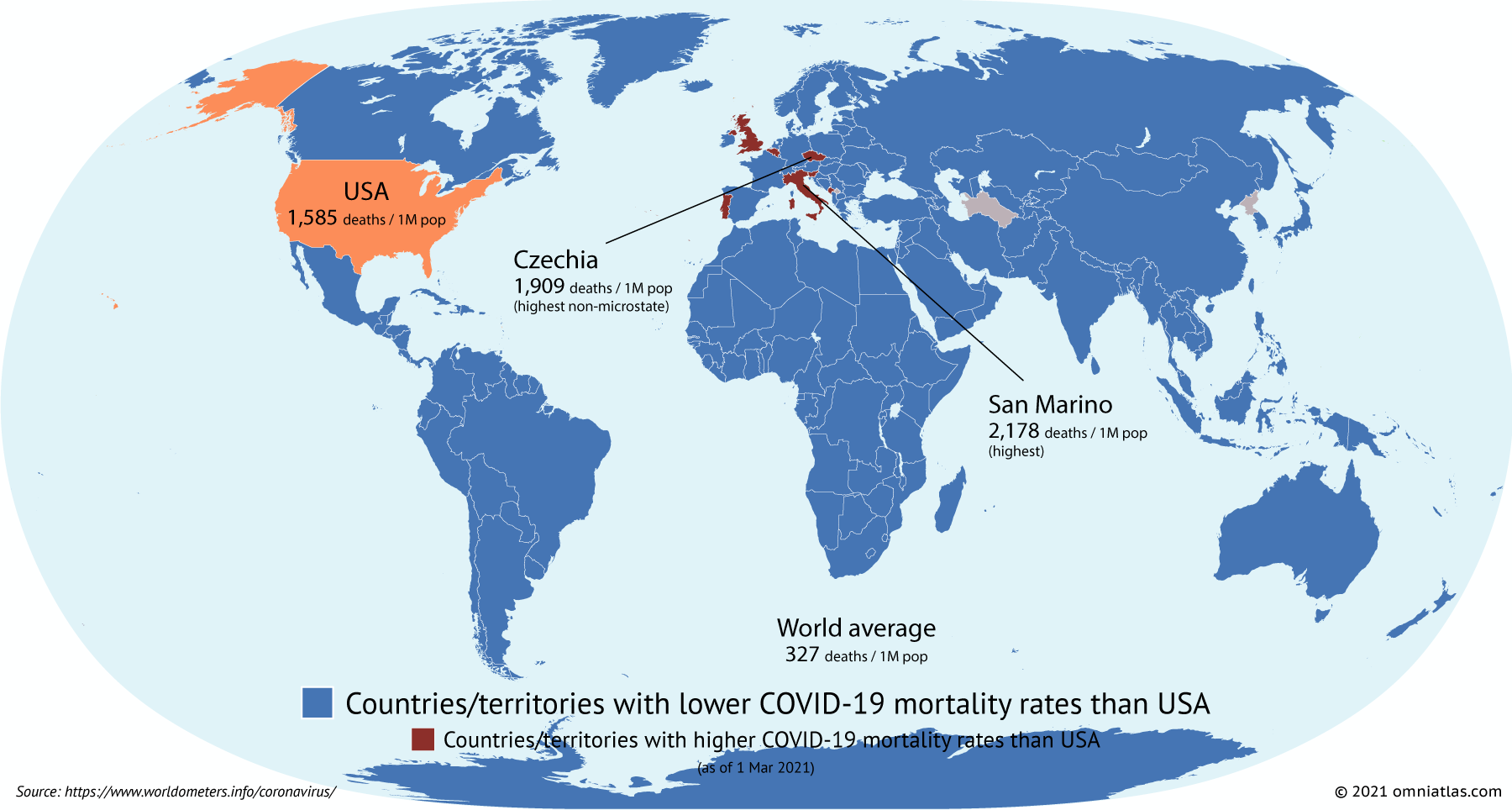 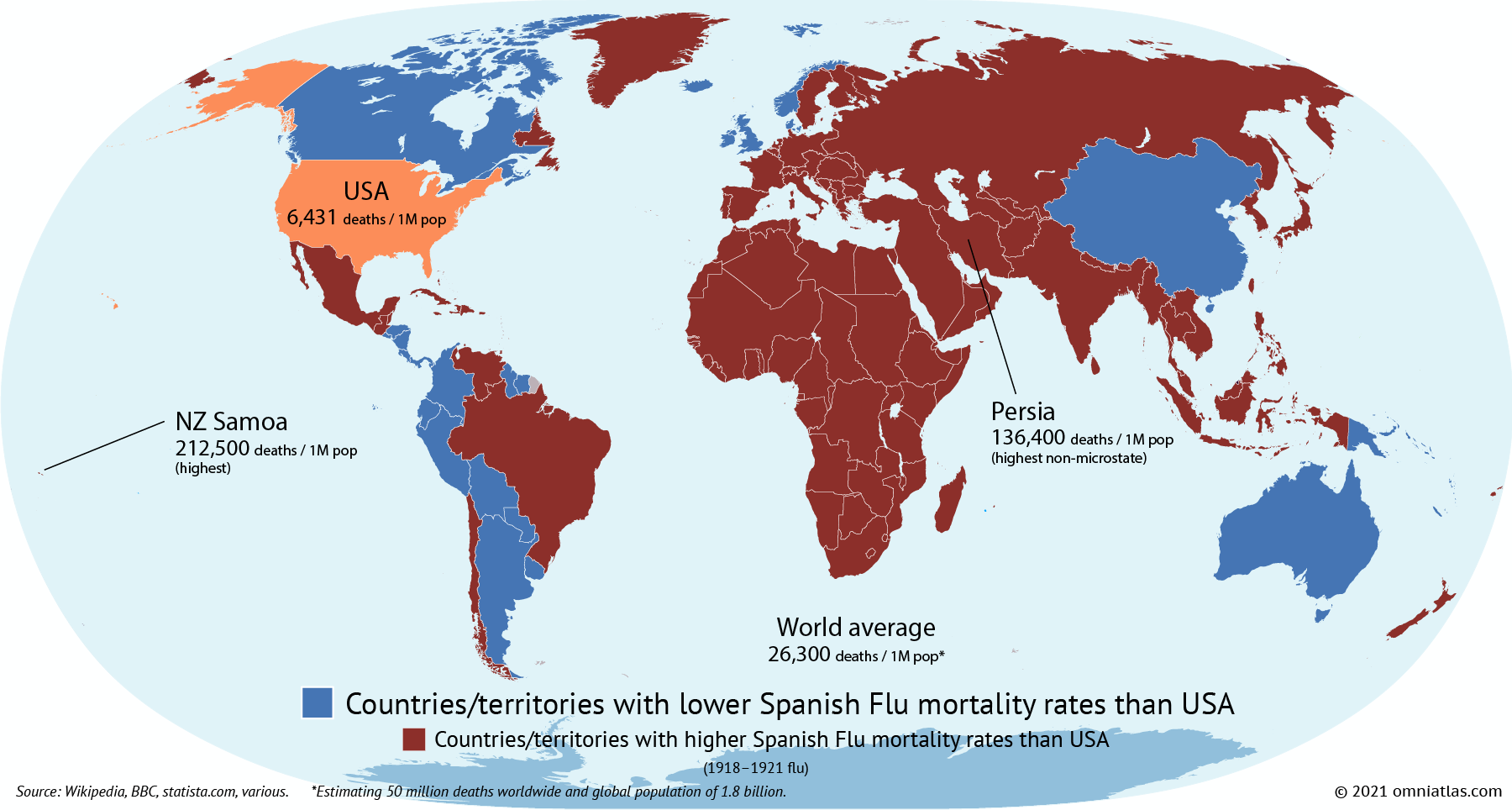 Differences between the two pandemics

First off, I want to note that the Spanish Flu and COVID-19 were two different pandemics that erupted in very different times.

The Spanish Flu was more lethal than COVID, striking worst amongst young adults, and generally occurring in waves that lasted just a few months. It broke out, in 1918, in a world that was at the end of a World War, that was wracked by widespread revolution, and in which most of Africa and the South Pacific, and much of Asia, was under colonial rule. It was also exacerbated by large numbers of servicemen returning home from the front.

By contrast, COVID is most lethal amongst the elderly and those with preexisting conditions, but, despite or perhaps because of its lower general lethality, it occurs in waves that can last for over a year. COVID emerged in late 2019, in a world largely at peace, where flourishing trade and tourism allowed it to spread rapidly. Scientific and medical advances in the past century have also helped society continue to function under lock-down, while allowing researchers to discover a vaccine.

To compare COVID mortality rates with the Spanish Flu, we’ll need an index, but rather than using arbitrary numbers, I figured it would be interesting to compare pandemic and non-pandemic deaths at the same time. To this end I have created the equivalent death rates index: 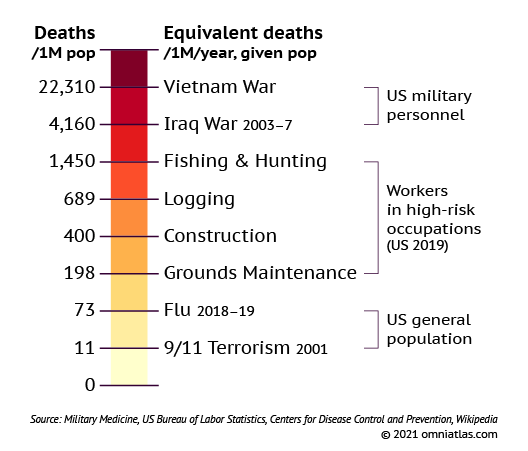 This index compares annual US deaths in war, high-risk professions, seasonal flu, and terrorism. I’ve stuck to the US in recent times to make the figures as comparable as possible.

The sample war deaths show deaths per million military personnel per year in the Vietnam War and Iraq 2003–7 War respectively. [1] The war in Afghanistan, incidentally, had roughly the same death rates as Iraq.

For the high-risk professions we have deaths per million per year among fishing and hunting workers; logging workers; helpers, construction trades; and grounds maintenance workers in the US in 2019. [2] Note that the risk in these professions varies from year to year; in some years, logging is a more dangerous profession than fishing and hunting. Also be aware that, while fishing and logging were the 1st and 2nd most dangerous US professions in 2019, construction and grounds maintenance ranked 5th and 10th rather than 3rd and 4th—I’ve skipped the in between professions to provide a good spread of numbers.

Lastly we have seasonal flu and terrorism. These are compared to the entire US population at the time.

The most recent data for flu deaths in the US that is not influenced by COVID-19 is for the 2018–19 season. [3] In this season, there were an estimated 34,000 flu-related deaths. This is the fourth lowest in the past 10 years, but, as even the highest in that period (61,000 in 2017–18) would still produce a significantly lower death rate per million than grounds maintenance in 2019, it seems to be a good representation.

Finally, we have deaths by terrorism. The most lethal terrorist attacks thus far in US history are of course those in 2001. [4] With the shocking loss of over 3,000 people in just a few horrific attacks, these incidents amounted to about 11 deaths per million in the general US population of the time. While still a very substantial amount, this will mark the lowest entry in our index above 0. [5]

So now that we’ve established a comparative index, let’s move on to pandemic deaths.

Here we have maps showing the mortality rates (deaths per million) of COVID-19 [6] and the 1918–21 influenza pandemic (Spanish Flu) [7] across the world, with our equivalent deaths rate index as a guide [8] : 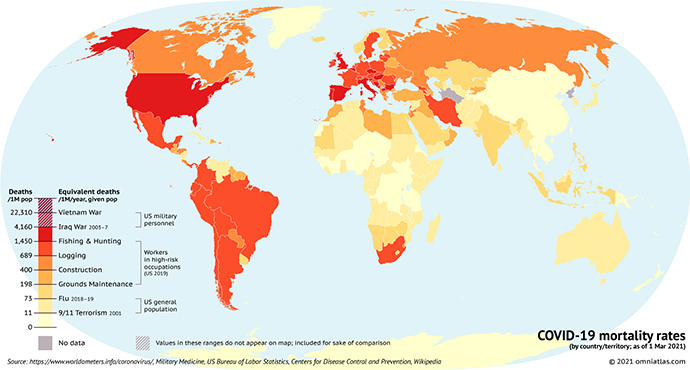 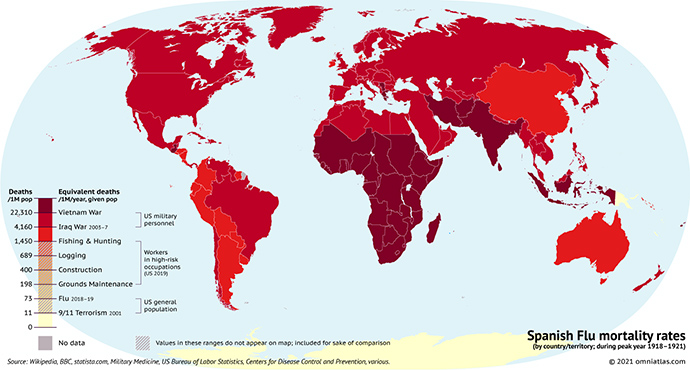 Looking at the maps above, the most striking difference between COVID and the Spanish Flu is one of sheer lethality.

COVID is no joke. It’s death toll is an order of magnitude higher than that of the 2018–19 US flu season and its mortality rate is comparable to the highest risk professions, such as fishing, hunting, and logging.

Even so, the Spanish Flu completely dwarfs COVID. The only countries that escaped war zone-level casualties were those that successfully evaded the flu altogether.

Just as interesting is the geographic distribution of the pandemics. While the Spanish Flu was most severe in Africa, southern Asia, and some Pacific islands (most of these regions being in the colonial world of the time), COVID has hit hardest in Europe and the Americas.

That brings us to our next topic, comparative US performance in the two pandemics.

Below we have two maps showing those countries which performed better than—and those that did worse than—the US when facing COVID-19 and the Spanish Flu respectively: 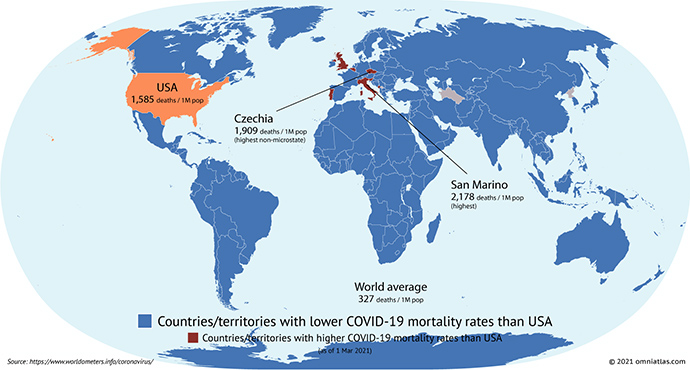 COVID-19 mortality rates: US compared to the rest of the world 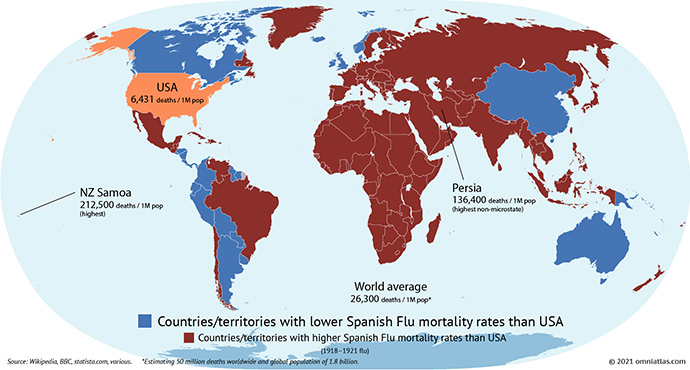 1918 Spanish Flu mortality rates: US compared to the rest of the world

Again there is a huge difference between the two pandemics.

Facing COVID, the United States has so far (as of March 2021) been one of the worst performers, beaten out only by the United Kingdom, Italy, and a few small European countries. Astoundingly, the death rates of these nations—1,585 in the US, 1,909 in Czechia, and 2,178 in San Marino—have even approached those of some of the better performers in the Spanish Flu—2,000 in Denmark and 2,484 in Australia.

But back in 1918, it was different. While not doing as well as Denmark or Australia, the US death rate of 6,431 per million was well below the world average of 26,300 per million and only slightly worse than the UK’s 5,911. And the US did far far better than most of continental Europe or the COVID era’s ‘poster children’ of Taiwan, South Korea, and New Zealand. The last of these not only had a death rate of 7,439 / M but was at least partially responsible for the horrendous 21% death rate in its colony of Samoa, an outbreak which a 1947 United Nations report termed “one of the most disastrous epidemics recorded anywhere in the world during the present century”. [9]

So what can we conclude from this brief comparison?

Only a handful of countries did well relative to their neighbors in both pandemics: Australia, China [10], Denmark, Ireland, Nicaragua, Papua New Guinea, and Uruguay. Given the number of countries involved over all, it’s quite likely that any correlation here is due to chance. However, it’s probably reasonable to assume that the success of Australia and Papua New Guinea (under Australian administration in 1918) during both pandemics has been due to a combination of geographical isolation and the strict quarantines which were enacted in both periods. Isolation is good, but only if coupled with strong policies to take advantage of that isolation. Otherwise it can lead to catastrophe, with relatively small and/or resource-poor populations being overwhelmed, as occurred with the Spanish Flu in the South Pacific, the Arctic, and the African interior. So geographical isolation helps, but only if combined with other measures.

The small set of doubly successful countries also implies that there is no long-term cultural factor at play. East Asia and Africa might have an advantage when fighting COVID-19 because of their recent experiences in dealing with Swine Flu, SARS, and Ebola; the US, UK, and others might have been disadvantaged by flawed leadership; but, as most of these countries fared quite differently when facing the Spanish Flu, it seems reasonable to conclude that no culture is inherently better at fighting pandemics than any other.