I urge the Turkish people to gather at public squares and airports... There is no power higher than the power of the people.

On the night of 15 July 2016, elements of the Turkish Army made a bid to seize control in cities across Turkey and bring an end to the government of President Tayyip Erdogan. Despite initial successes, the coup attempt soon collapsed. In its wake, Erdogan conducted extensive purges of the military and civil services. Although international opinion almost universally opposed the coup attempt, it was more mixed with regard to these purges. 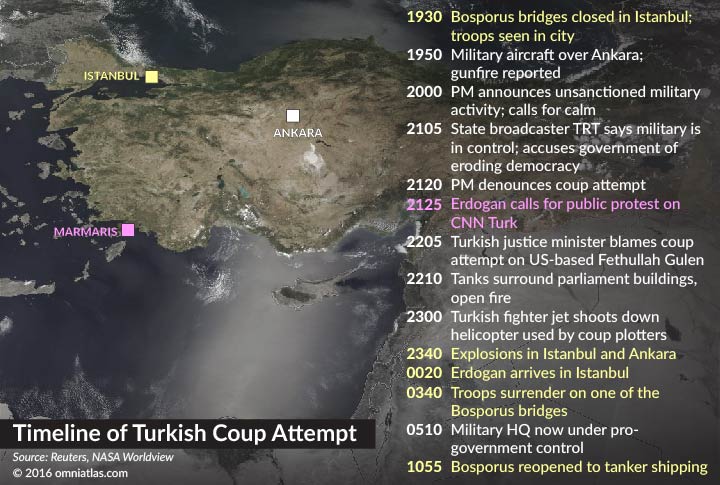 At 1930 GMT (10:30pm Turkish time) on Friday night, 15 July 2016, reports began reaching the outside world of troops taking control in Istanbul and Ankara. By 2105 GMT (12:05am) it appeared that a military faction was in control after mounting a successful coup d’état, but within half an hour announcements from both Prime Minister Binali Yildirim and President Tayyip Erdoğan made it clear that this was not the case. From then on, the coup quickly unraveled, with most of the perpetrators surrendering early that morning. More than 300 people had been killed and 2,100 injured over the course of the coup attempt.

A coup d’état is an attempt by internal forces to illegally seize control of a state. As such, it has to be both sudden and unexpected to succeed.

Coups have declined in popularity since the 1980s, but were once common enough that books have been written on how to conduct them. In a recent article on the Turkish coup, George Friedman of Geopolitical Futures broadly covers the steps: "invent a reason why masses of tanks are going toward the capital, air force planes are preparing for missions and the leaves of soldiers are being cancelled", "capture communication channels", and seize the leaders. The flowchart below covers his main points: 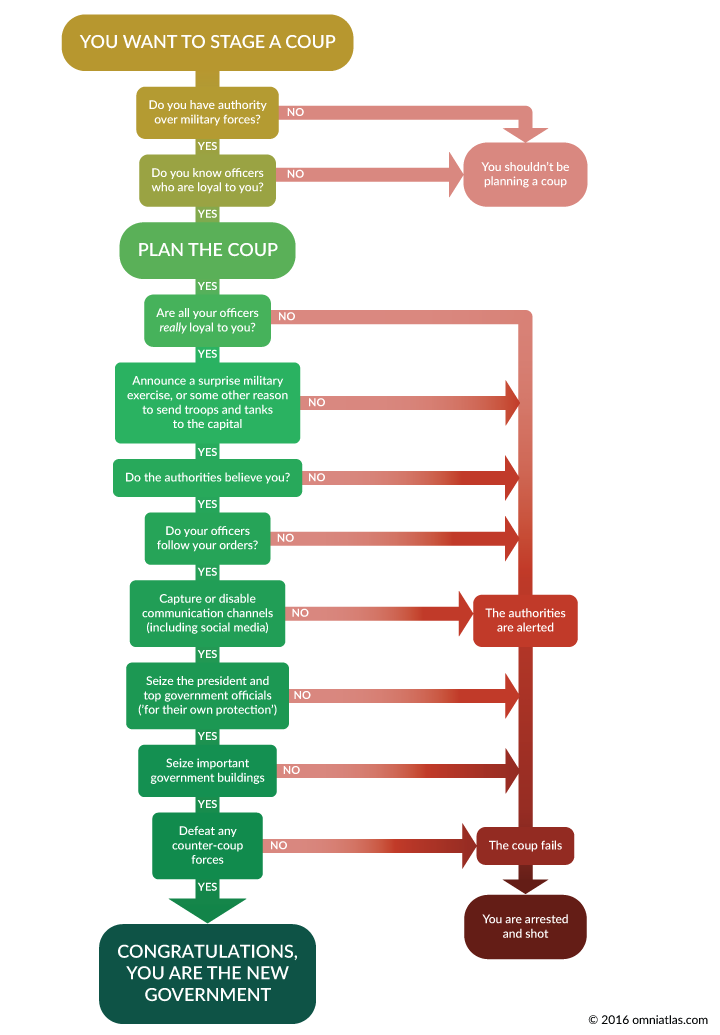 Figure 2. How to stage a coup d’état - a quick guide

Clearly the 2016 Turkish coup attempt failed both to completely secure communication channels and, most critically, to seize President Erdoğan. Having failed in these areas, it proceeded to fall apart.

Why the Turkish coup failed

Having established how the Turkish coup failed, the question is answer is why. In Friedman's opinion, several things were amiss:

Friedman concludes that either the coup plotters were incredibly incompetent or that Erdoğan was involved in some way - either the coup had been infiltrated early on or Erdoğan himself had orchestrated it. Given Erdoğan's behavior after the coup, it seems likely he had some knowledge of it beforehand.

The impact of the Turkish coup attempt

Whatever Erdoğan's knowledge of or involvement in the coup, he quickly made use of it to purge organizations he considered suspect, declaring a three-month state of emergency on 20 July. The purges targeted not just the military, police, and politicians but also civil servants, the media, and in particular the education sector - with teachers making up about 36,000 of the roughly 60,000 purge victims. Although this number is currently well below the 500,000 who were purged after the US-backed 1980 Turkish coup, it is unprecedented for a modern democracy and has brought considerable criticism from human rights groups and the West, who see it as an authoritarian and potentially Islamist bid to undermine Turkey's democracy and secularism.

US-Turkish relations have been further soured by Erdoğan's claim that his former ally and US-resident Fethullah Gülen was behind the coup and should be extradited to Turkey immediately. Gülen's involvement was not impossible - he was also allegedly behind a 2013 attempt to undermine Erdoğan - but the US naturally demanded evidence before deporting him. The Turkish government has since extended its accusations against the US by insisting that US Central Command chief General Joseph Votel was also behind the coup. Both Gülen and Votel have denied involvement.

On the other hand, the coup has allowed Erdoğan to mend Turkish relations with Russia, which had soured after a Turkish fighter jet shot down a Russian bomber over Syria in 2015. Russian President Vladimir Putin was quick to denounce the coup, with Erdoğan responding by reassuring Putin that, despite what he had said at the time, he hadn't in fact been involved in the 2015 Syria incident after all. Following this claim, he ordered the arrest and trial of the pilots responsible.

In Syria, the coup attempt and its aftermath are likely to weaken the Syrian opposition movement, which has a considerable presence on the Turkish border and was receiving support from the Turkish military. In the view of the Institute for the Study of War (ISW), actors that may benefit from this are Assad's regime, Daesh (IS), and the US-supported Syrian Kurds. Any growth of Kurdish power might further antagonize US-Turkish relations, possibly escalating to the point that Turkey refuses the US access to the strategic Incirlik Airbase, while Daesh may use the disruption along the border to import more troops and resources into Syria. In an even more extreme vision, ISW sees the potential for Turkey to become a safe haven for al Qaeda in a dangerous bid to counterbalance both the Kurds and Daesh.

Despite this, most analysts seem to think that these post-coup events will shake but not destroy Turkey's relationship with the West. The US and Europe need Turkey to contain the crisis in the Middle East, a crisis Turkey also needs contained. As for the current thaw in Russo-Turkish relations, it seems unlikely that the temporary benefits it provides to the two countries will bring a complete end to 450 years of recurrent conflict. 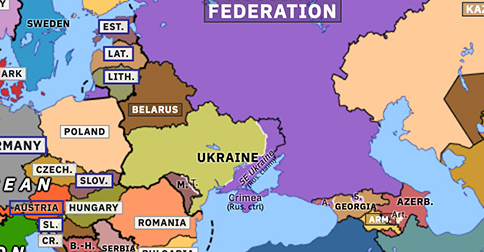